GISELA is inspired by vintage dolls, with her characteristic curly hair and lace dress. 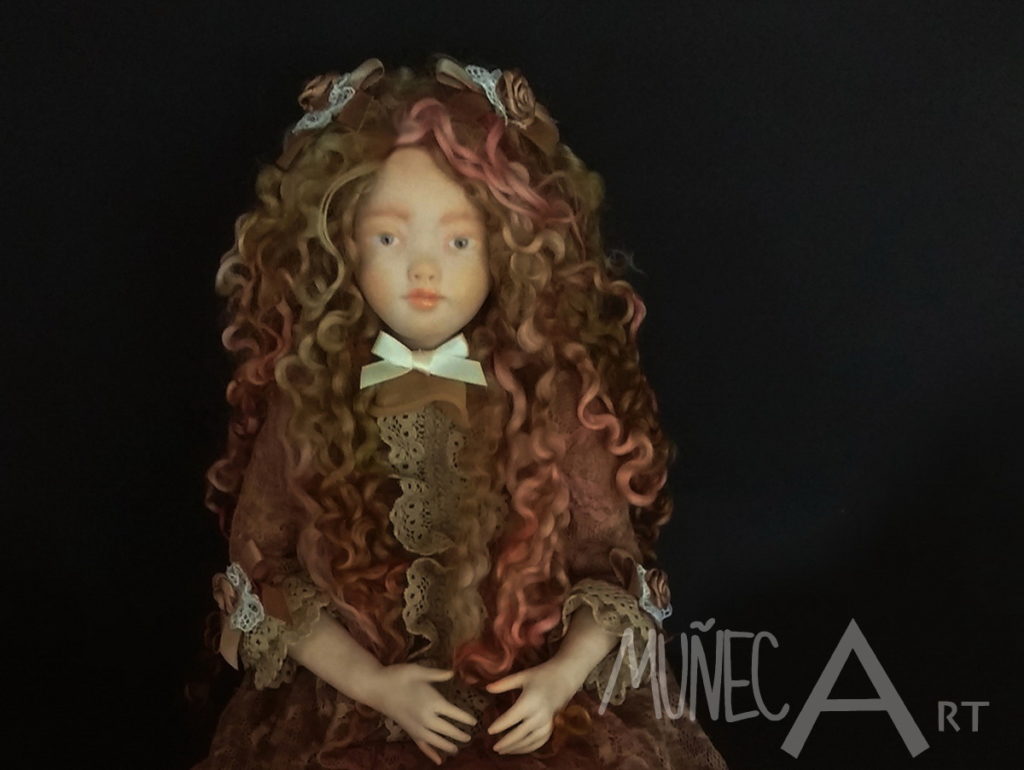 It measures 45 cm and is an articulated doll. Its head, hands and feet are made of polymer clay and the body has a structure of wire and fibers. The hair is made of Tibetan sheep wool dyed in fancy colors. The dress is in earth-toned organdy chiffon and is adorned with lace and lace. The eyes and skin are subtly painted with genesis paints and ceramic varnish. 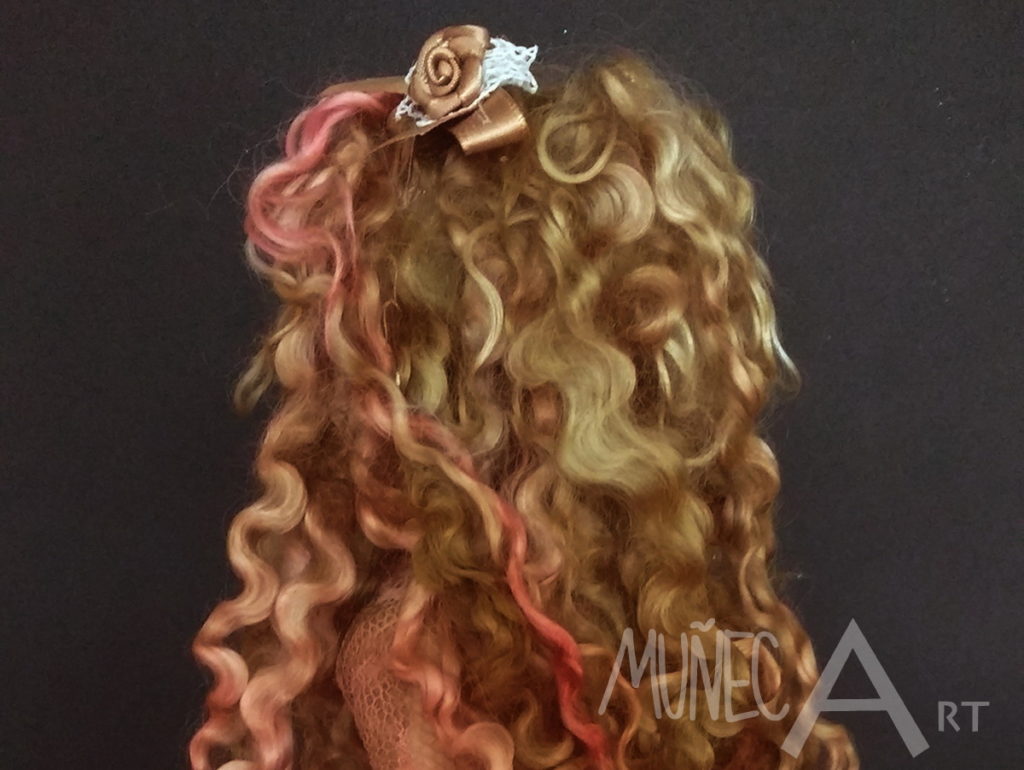 Elin is a one-piece doll made from polymer clay. It represents a mermaid from the Mediterranean. 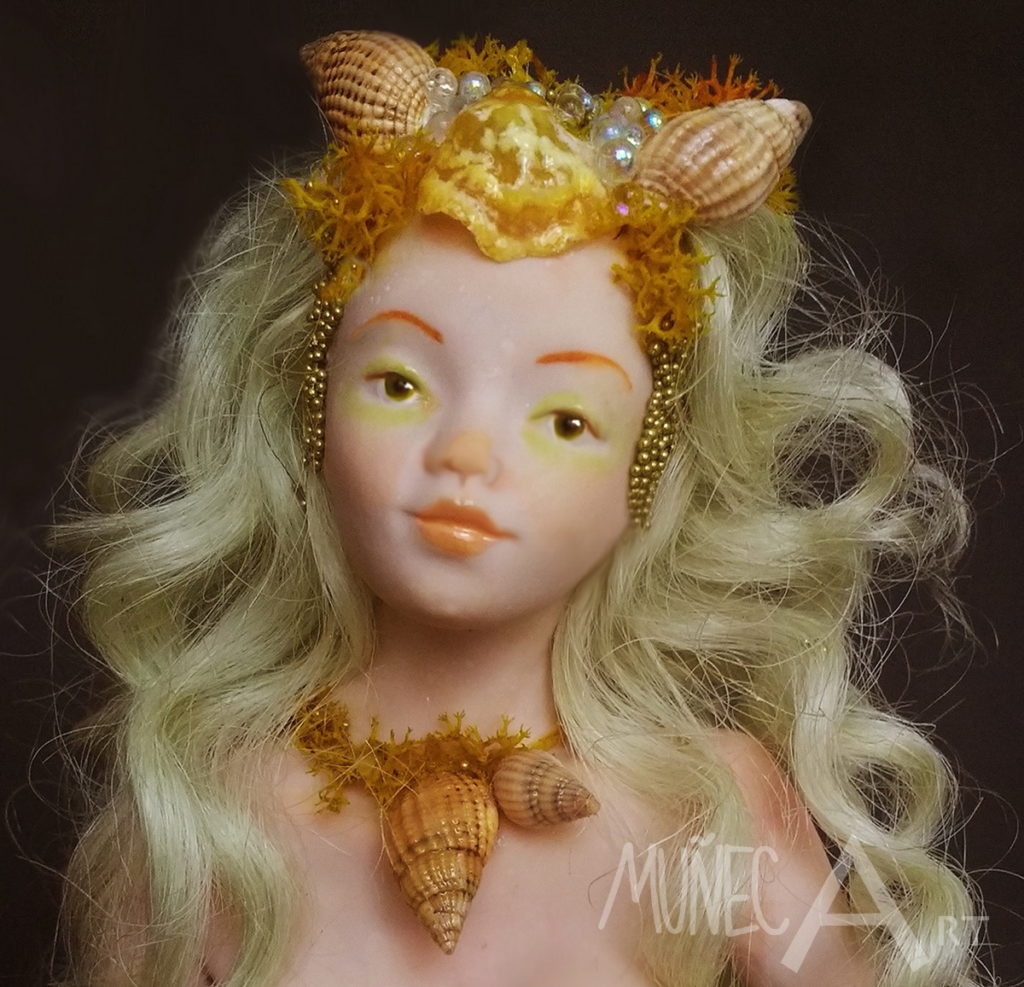 It is painted with genesis paints and ceramic varnish. The hair is made of sheep’s wool in a blonde tone and is adorned with small natural shells, moss and golden microspheres. Its tail fin is made with wire and Angelina film, painted and baked. It rests on a clay platform decorated with small natural treasures from the Mediterranean Sea.
Measures 24 cm long by 20 wide. 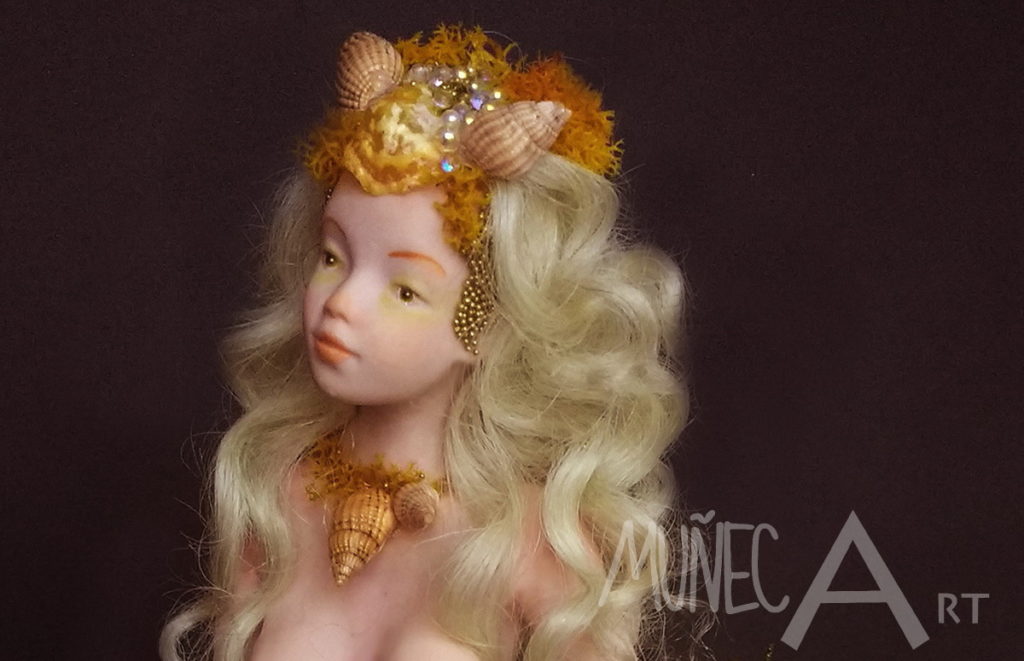 This bust represents a sweet witch preparing for the upcoming Halloween. 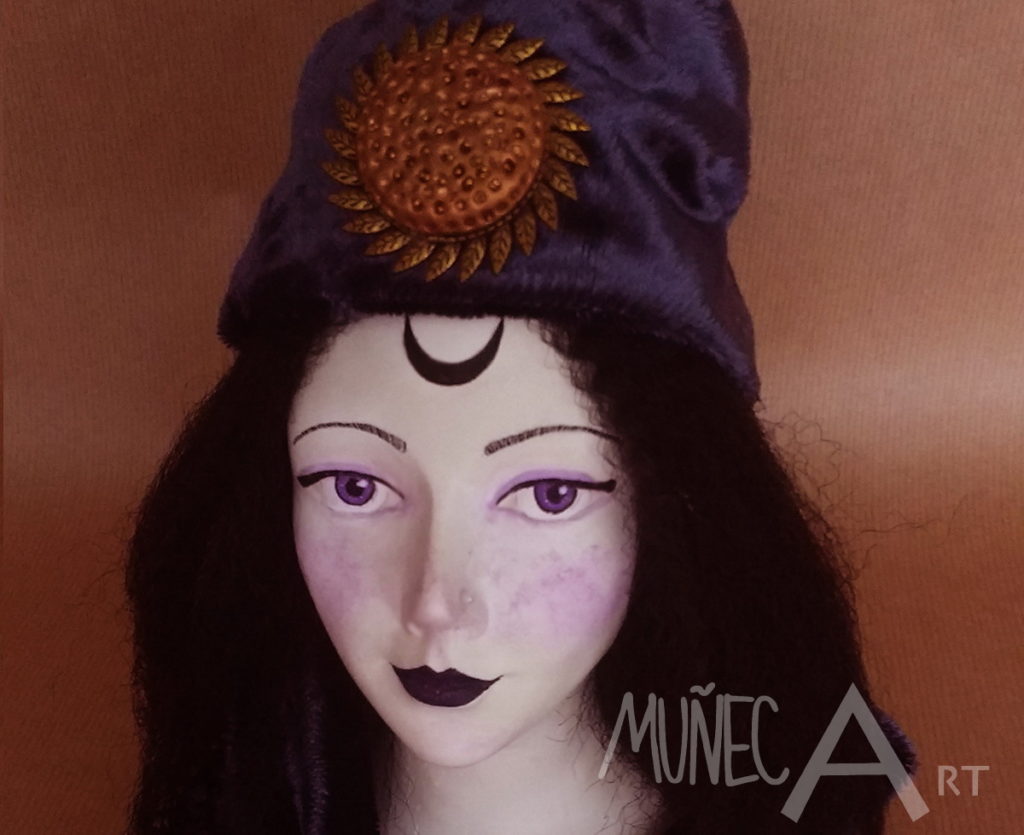 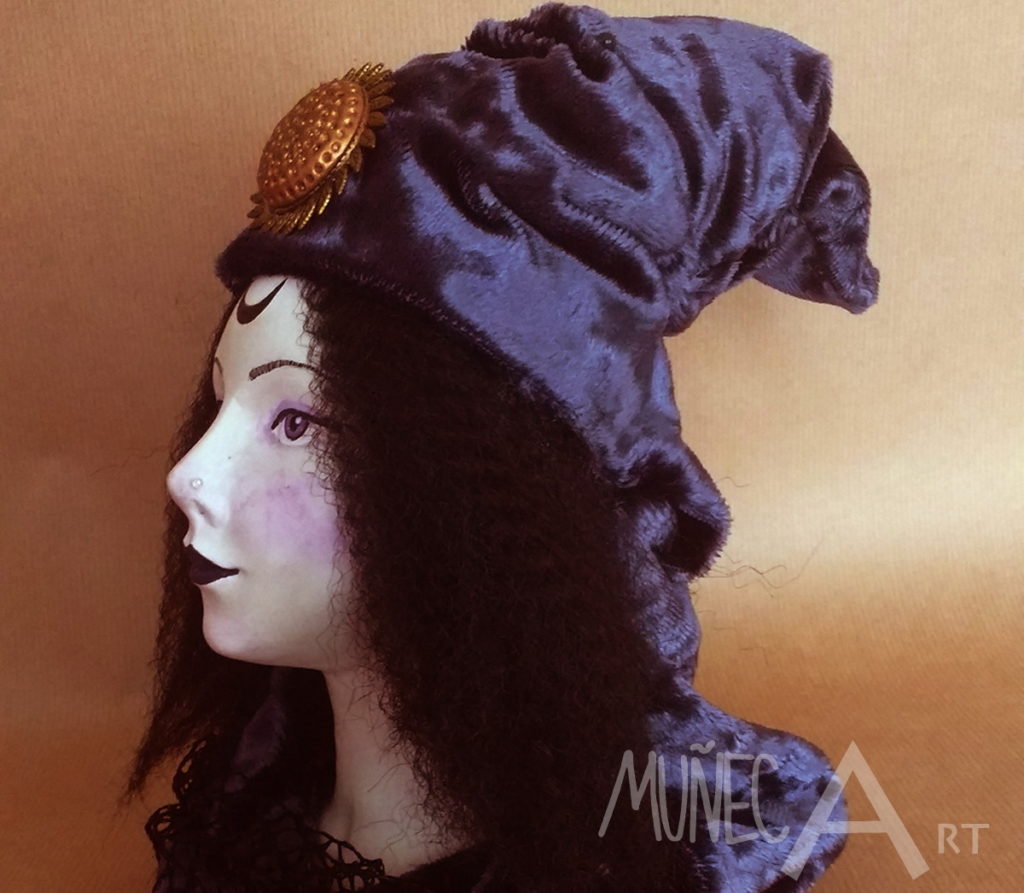 Olga is the bust of a fairy inspired by the ancient Pre-Raphaelite romantic statues. 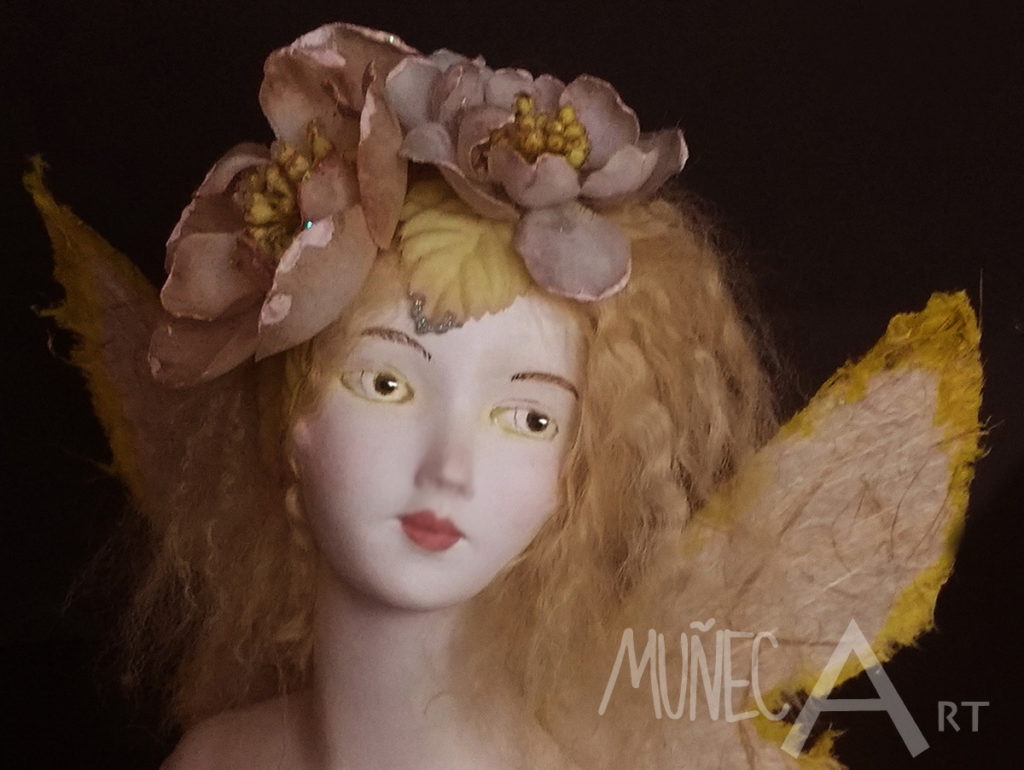 It is made with ceramic paste painted with oil paints. The hair is made of Tibetan sheep wool in blonde color and decorated with handmade fabric and paper flowers. The wings are made with organic paper made from natural leaves.
Measures 17 cm high by 22 wide 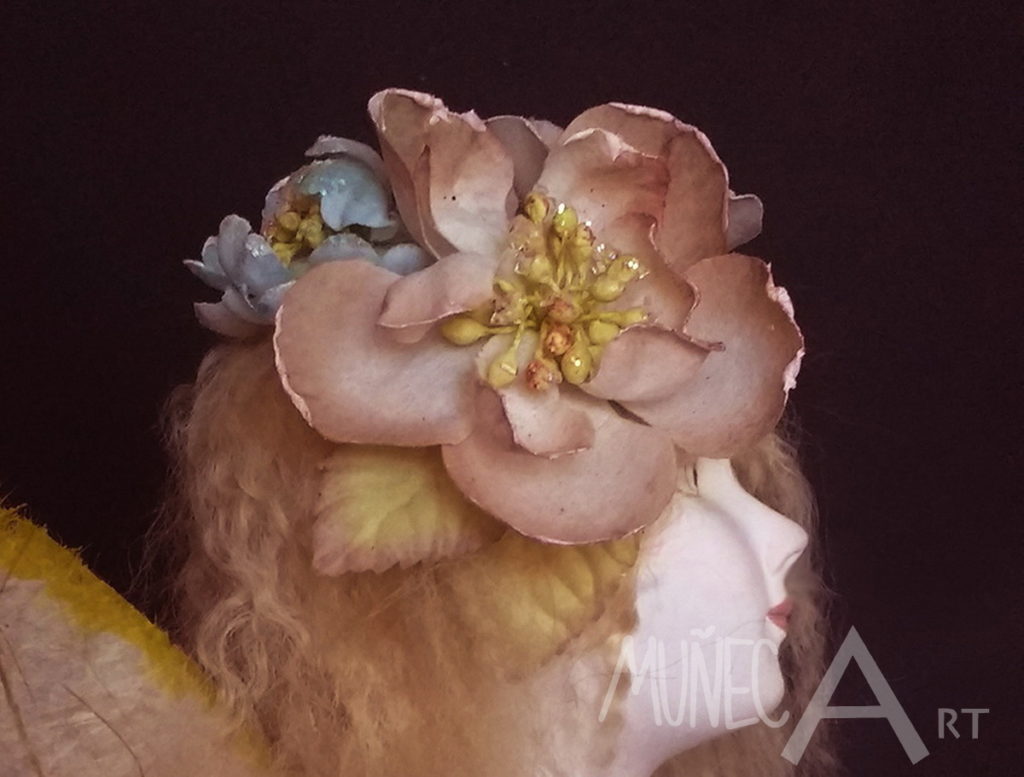 My name is Wisha Segarra, I live on the Spanish Mediterranean coast. From a very young age I had a great inclination for art and the fantastic world of fairies. My maternal grandfather was a painter and musician, so the artistic environment was always present in my home.

I worked for several years as a creative designer in different companies in the tile sector. My works in ceramic design have been exhibited in important European fairs and exhibitions.

In 2015 I discovered the Ooak world and it fascinated me, so I decided to create my own dolls mainly inspired by the fae world.

A few months later I opened an online store with the name Wisha Magic Forest and since then my dolls have reached different corners of the world and are part of several private collections in different countries.

In the spring of 2015, a few months after starting my adventure as a doll maker,

I won first prize as a beginning artist in the spring competition of the International Register of Art Dolls.

In 2018 I also obtained another first award in the intermediate category from the same IADR organization.

In 2019 I was named “Rising Star” and received the Promising Artist of the Year award.

I am currently preparing several exhibitions of my dolls in Spain.

In 2019 I enrolled in the Valencia School of Ceramics, where I continue to learn different applications of ceramics in art, including the creation of dolls.

I think that giving life to my dolls is creating magic and working in my studio is the most rewarding for me.