Doll in crinoline dress with umbrella from years 1850 – 1860. Made in a single copy from authentic document / photo. 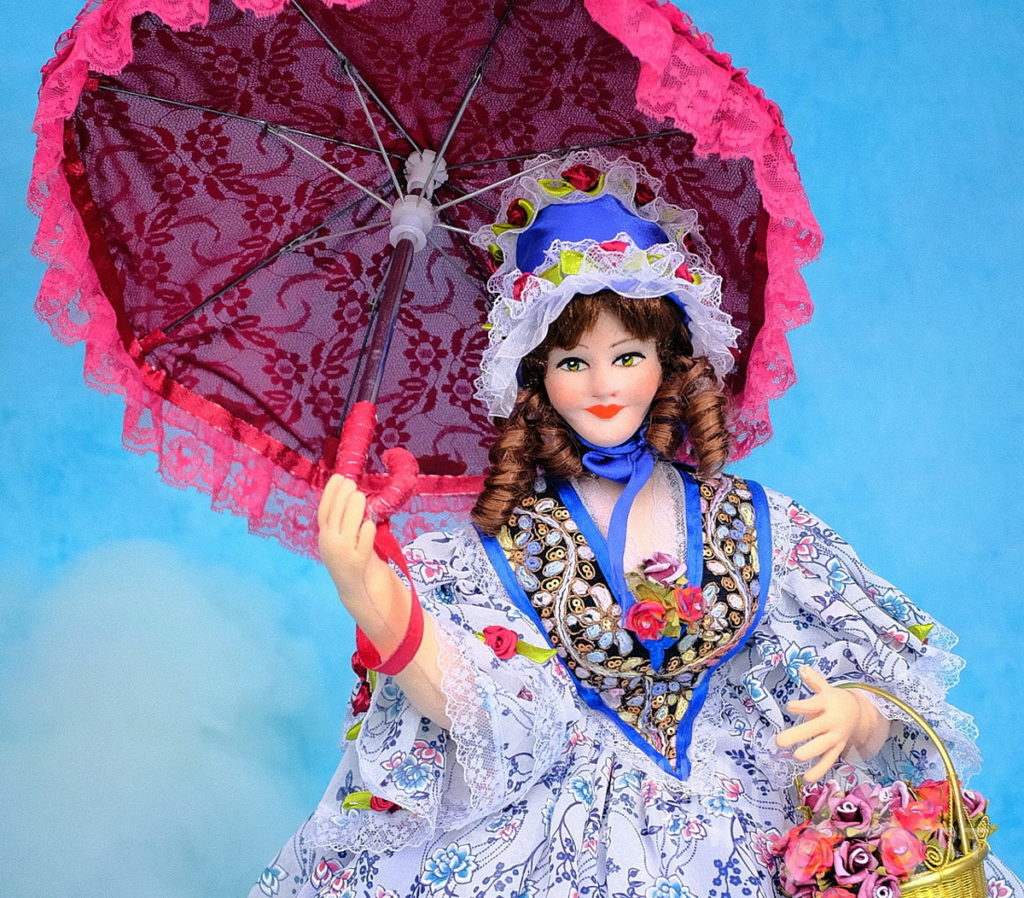 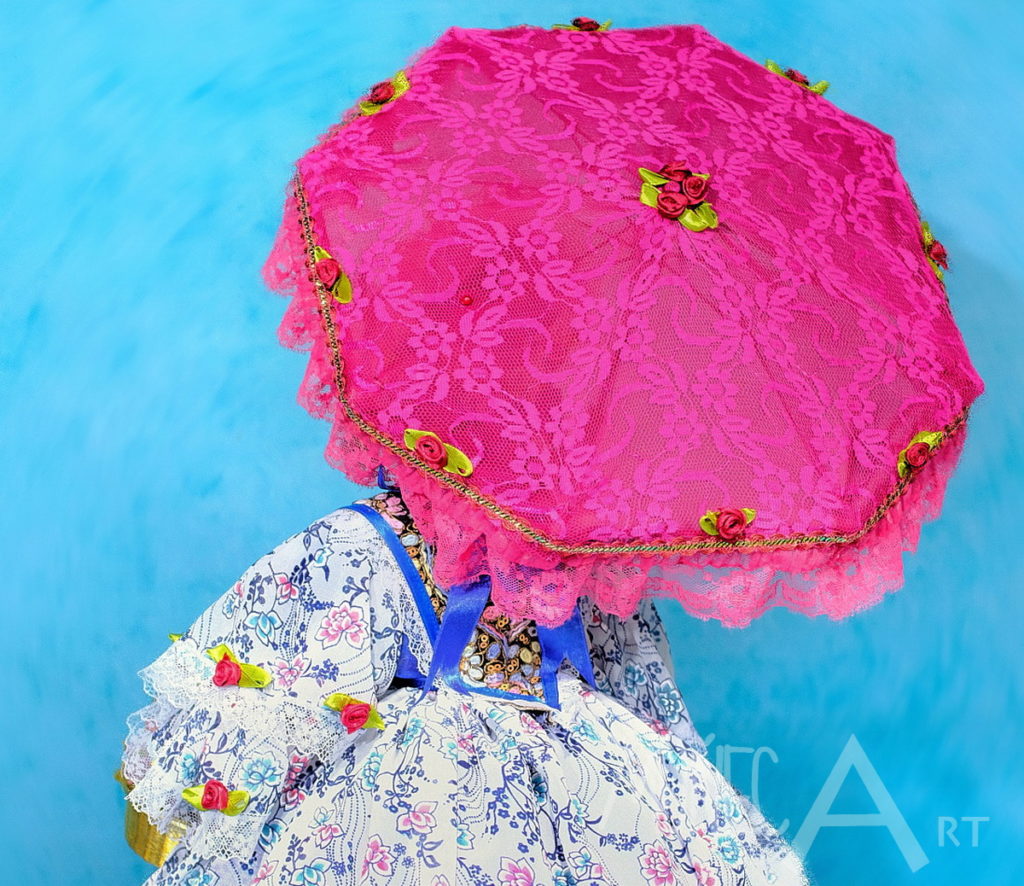 Doll in Victorian dress with cat from years 1880 – 1890. Made in a single copy from authentic document / photo. 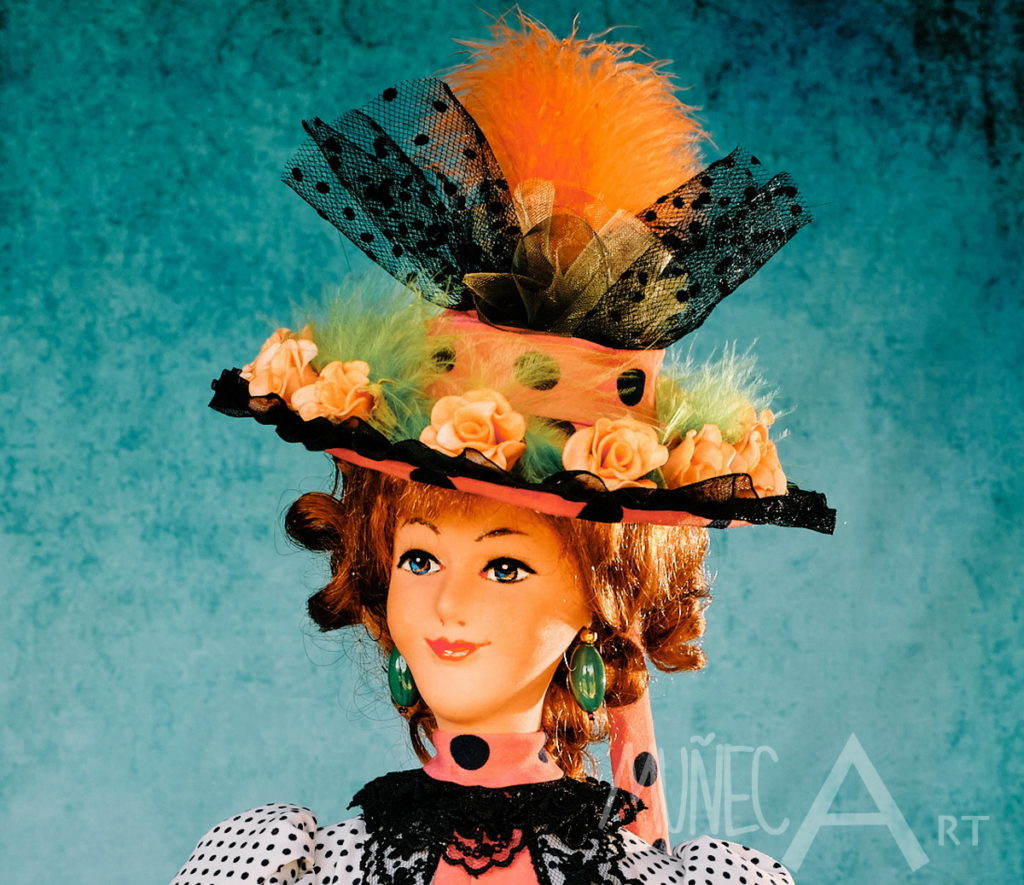 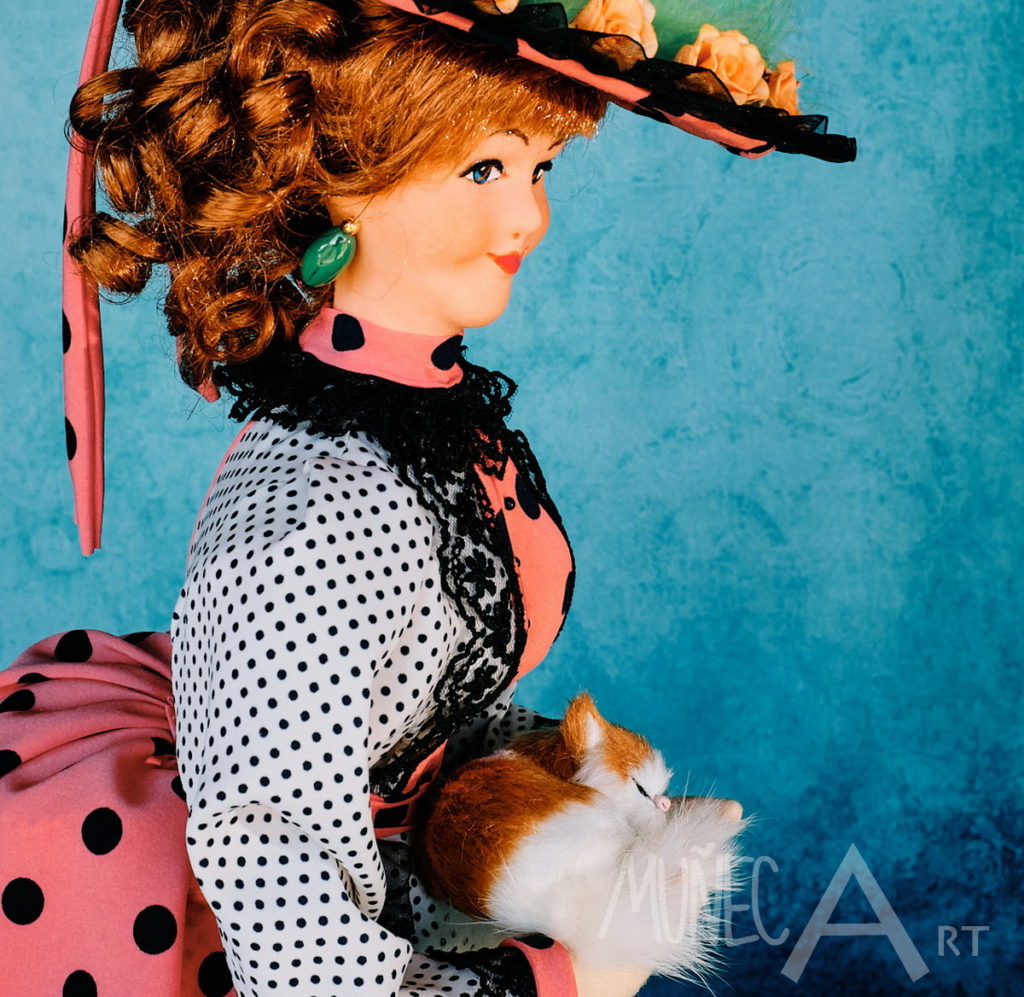 Doll in purple Victorian dress years 1880 – 1890. Made in a single copy from authentic document / photo. 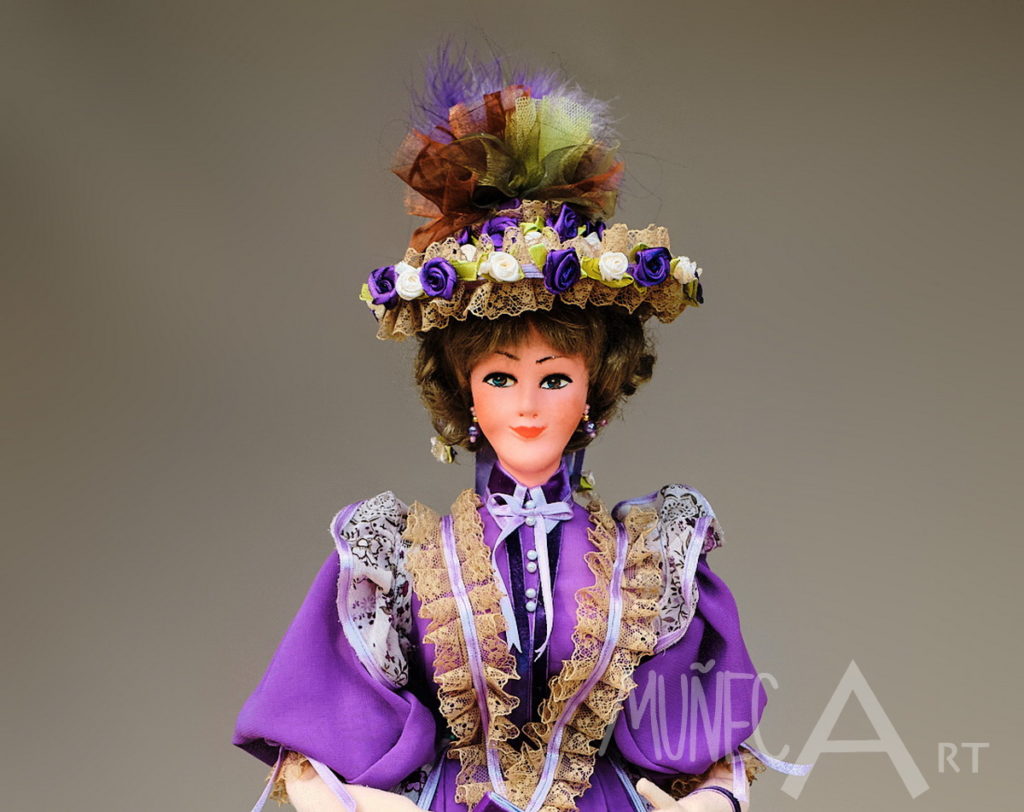 Doll in fashion dress of years 1870’s . Made in a single copy from authentic document / photo. 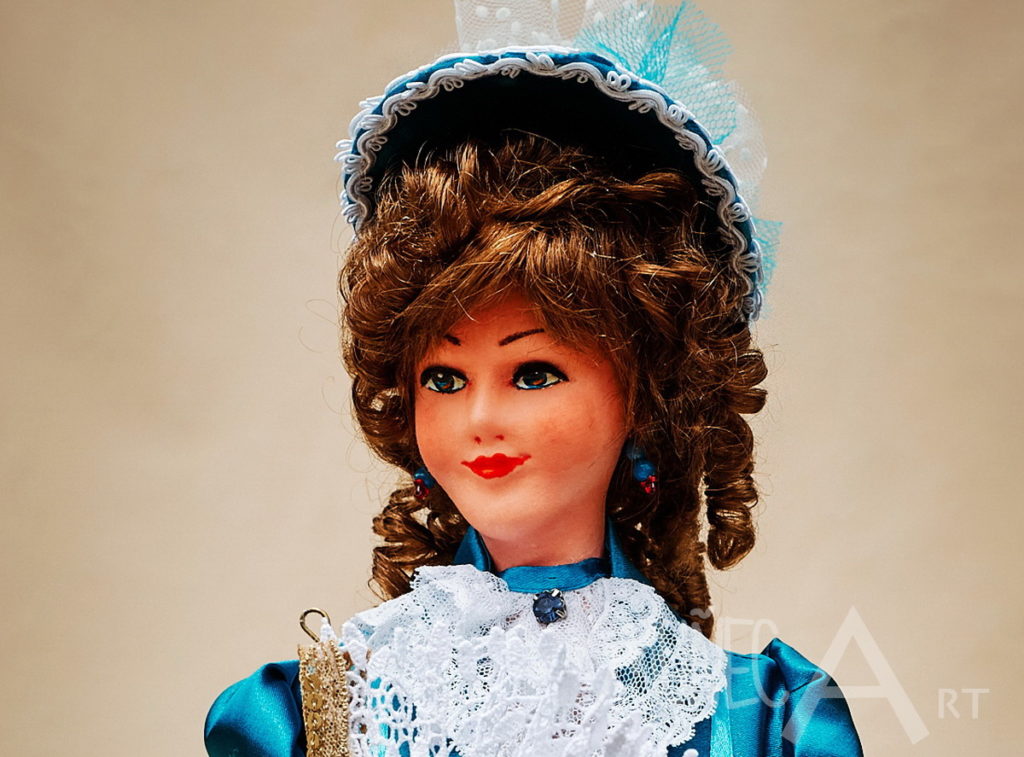 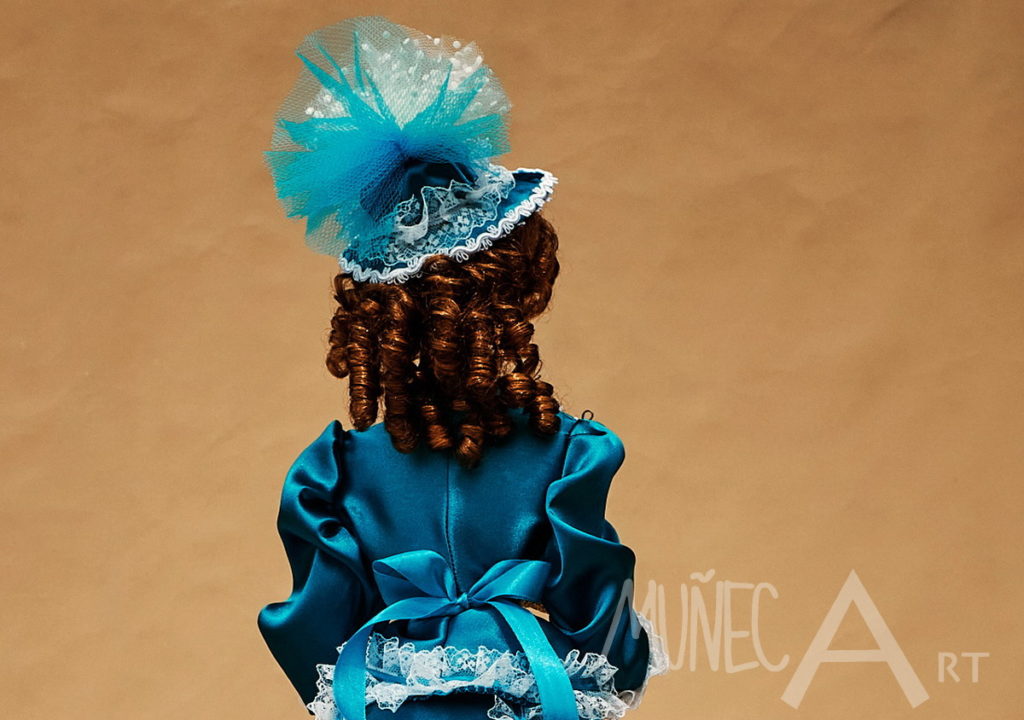 Rózsa Guba – was born in 1951 in the Hungarian lowland of the Great Plain. In 1985 she was invited to a degree of Folk Artist of Folk Costume Dolls. She adapted and at the same time assessed the most famous folk costumes from the individual regions of Hungary. For example, the folk costumes from the regions of Sárköz and Kalocsa from the beginning of the 19th century and many folk costumes from the regions of Baranya, Transdanubia, the Great Plain, and Palócföld. She created the most of her works for the Japanese market but they can be found practically everywhere around the globe. Her works represented a part of many “international” presents in the 1980’s, for example, they are included in the collections of the Chancellor Helmut Kohl or Fidel Castro.

In 2020, he received the “Outstanding Professional of the Year 2019” on the recommendation of an independent professional committee, internet survey, citizens, professional organizations and chambers. award at the Professional Elite 2020 Awards Gala.

Rózsa Guba creates all of her dolls herself, from carving the sculptural negative of the faces to shaping the head, body and clothes from textiles. The figures and scenes are most often based on a contemporary painting, daguerreotype or photograph, which in the case of Hungarian folk scenes often come from their own collections and local processing. In all cases, she tries to make her dolls from an authentic source at the most age.And in the materials used for clothes, it tries to recycle old textiles, even if symbolically, in an environmentally conscious way. Thus, it is not uncommon for hundreds of years old laces or a few tens of years old fabrics to appear in his creations. She is currently working on a collection of dolls, “From Prehistoric Man to the Retro Era”, which will cover fashion developments and will be on display at the next doll exhibition.